We had a worrying weekend with my king. He had a fever Wednesday evening. I don't really like to immediately go to the medicine unless absolutely necessary, so after some kangaroo care, the fever went down. On Thursday, he was fine. Our day went as normal, but then in the evening he had a fever again so we gave him some fever medicine. Unfortunately during the night though, he was hot again.

So, the next morning BD called in to work and we went off the doctor. After some lab work, she said it could be a "small" case of dengue. That was the scariest thing she could've said to me. We spent the weekend going back and forth to get lab work done to monitor his numbers. My king got pricked so many times!!! On Sunday, we went to the Children's Hospital in our city. I dislike all the hospitals here, so I was surprised with this one. The employees, the way they worked. I kept hoping they wouldn't hospitalize him but in the back of my mind I was impressed with the hospital.

Luckily, he didn't need hospitalization or any more meds. Tuesday, we went to his regular pediatrician and she said he was fine. I knew that though because by Monday he was up to his old tricks. Isn't a sick child the worse? I did nothing except lay with him the whole time.
Anyway, that's what's going on with personal me. LOL Now on to something kind of old I've been wanting to share.

If you don't know, one of the things Iove doing is creating. I love working with my hands. It's something I got from my dad (definitely from my dad). I love making jewelry with polymer clay (which I sell in my shop, N-E-Things). But, I also love doing artsy stuff with my king. (LOVE doing hand/foot print art with him - getting messy is so much fun!)

A while back I started doing mixed media. I've done some practice work trying out different techniques. I've never shared those though because...well, because they were really REALLY bad. LOLOL
Here are two videos I uploaded some months ago. I have some more canvases I want to work on and some ideas sketched out, but still have gotten around to them. Hopefully I will before this month is up. There's a cool mixed media blog that does challenges each month and I'd like to participate for June.


I think everyone needs to take some time to create. Like I said before, it's just so..."woosah-ing". I think it's why I love the Joss Whedon quote: 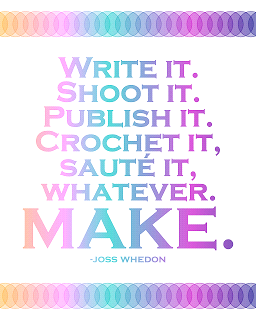 Do you take some time to relax and create? No? Then get to it!