I have another book review for you, but this time I read a book for myself and not for my king. (◠ᴗ◕✿)   I love mystery/thriller/suspense, but I also love sci-fi/fantasy which is this e-book's genre. Usually, I like to stick with the people "I know" and because of that sometimes I can be a little hesitant with authors I haven't read. It's happened that I try a book based on its reviews and recommendations without knowing much about the author and then I couldn't even get past the first chapter. (I'm looking at you Shades of Grey).

This time I wasn't hesitant to read the book because it's a post-apocalyptic novel and it just sounded much better than S&M. Another thing that got me to wanting to read this book was that it's a series and lately I've been about stories that aren't confined to just one book (well, that and short stories as long as they don't leave me wanting more). I was able to get the book Sky1 - Foundation at no charge from William Amerman (and yes, I LOVE his last name - I'm pretty sure how it's pronounced and no disrespect meant, but I insist on pronouncing it MY way because it makes him seem much more awesome). As soon as I got to reading it, my e-reader died (charger problems to be exact). So then I REALLY wanted to read it, especially with this description:


Seven hundred years ago, a city walled itself off from the rest of earth's inhabitants. Decades after first containment, this city named N. Aarde expanded upward, becoming a world unto itself. The population of this city-world has boomed to over eighty million people, but the history of why the world was built and what lies in the exo-world has been lost. This world is Nick's world.

When a quarantine is imposed on Nick's Ground, he and his family are trapped. Rumors spread that quarantines on some Grounds are not being lifted, the affected people never heard from again. The only way out is to break laws that carry a penalty of death. Fearing for the safety of his family, Nick joins forces with a local group to break out.

But can he trust anyone when the stakes are so high? 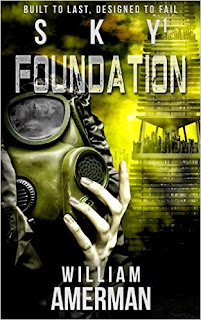 I don't know about you but the words containment, quarantine, and family got me interested immediately and I'm not disappointed that I read it. Basically the world's gone to crap. There is no more "outside" and no more "sky". It's just this dystopian world where instead of living in an actual city, you're living in this huge apartment building where each floor is a town in itself. People live in the different levels, or grounds, and it all depends on who you are and what you do. In that way it reminded me of the Chris Evans movie Snowpiercer. This guy named Nick (whom in my head was actually Nick Burkhardt, thank you Grimm) and some other people are trying to leave the ground they live in because of a quarantine. At the same time, because of that quarantine, it's not as easy to leave the ground. That's where the "story" comes in.

I started reading the book and it's an easy read, which is a plus, but look my brain gets lazy sometimes. #MommyBrain. (◠∀◠✿) I found there were times where I'm just reading something that might score a 90 on the Flesch test and then it drops to a 50 with just one word. I found it jarring. It didn't pull me out of the story. It "freight train-ed" me out. LOL It only happened a couple of times but that's why I probably noticed it. When the author could used a different word, he used a word that sort of didn't fit with the rest of the way the book was written.

When I read, I like to visualize everything in my head. Reading through Sky 1, I found myself thinking it would be a cool movie to see. There is this one part where Nick and his wife face a sad scene. Because of the quarantine, there are a lot of others that want to get out of that ground and for some reason the mayor thought it would be a good idea to set up a funnel-shaped fence towards the entrance of the building they are trying to get into. The way the installation, and the scene, was described it was a little confusing for me to visualize it. I read it again but finally ended up placing my own visual scene in my head and continued to read.

What I like about the book, though I'm not sure if others will, is that it goes back and forth in time. This may be a little harder to keep track of in a book than in a movie, but once you're into it you can tell what's going on and why. It also keeps you wondering what happened before the "before" you find in the book. LOL

I read an Amazon review which said there aren't any likable females and that the two female characters seen the most are negative stereotypes of women. I have to disagree. Yes, Jane is just unlikable. She annoyed the crap out of me. But, there are two other females that are more than what they seem. Possible spoilers: Storme's wife/Nick's ex doesn't get a lot of story time but from what she does get, you can tell she's smarter and tougher than Jane. There is also Ann who seems to be more than meets the eye (yes, I just said that). I'm pretty sure we'll get to see more of these ladies in the following books.

Would I read the rest of the series even when I really didn't like the ending? Definite spoiler: I didn't care that Jane was shot, but hated that Storme was. I'm thinking this is what needed to happen though so that Carmen and Nick got back together. Yes. I actually would. I plan to. I kind of have to know what happened before but mostly,what happens next.

DISCLOSURE: This e-book was a gift from William Amerman in exchange for my review. The views and opinions expressed in this post are solely my own. I am not an expert on any topic, product, or service. These are my honest opinions on my experience with the topic, product, or service being reviewed. This post also contains affiliate links because...you know, I'm a blogging stay-at-home-mom. (◠ᴗ◕✿) You can read the full disclosure on my disclosure and privacy policy page here.

0 comments on "First in a series: "Sky1 - Foundation" e-book Review"