The Continuing Dilemma of the Handmade Business 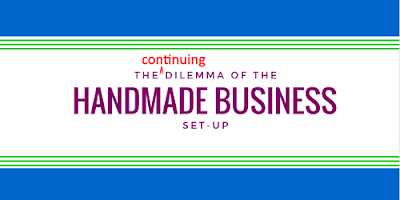 Last week I decided to keep looking into launching my handmade business. I went to the same place I mentioned in an earlier post but spoke to someone else. She was able to clarify the things I needed and what I would've needed if it were a brick and mortar shop. I felt relieved but there is one document which is an issue for me...for us.

We live on an avenue. We don't have a car so we rely on public transportation. The good thing about living on an avenue is that the bus stop is 2 minutes away. It's one of the reasons we decided to move here. This was pre-king though. Now that we have our king and now that he's an active toddler, we really want to move which is my dilemma.

Because the shop I want to open is online, I would have to use my home address as the place of business on the documentation. For that, I need to have a valid renter's contract. Our contract ran out a long time ago, but we never renewed. It's usually how it goes when you rent homes here. There's no renewing of contracts once the contract is up (at least not in any of the homes I lived in on my own and with my family when I lived with them before). The landlords just request notice ahead of time if you're moving out (which is the courteous thing to do anyway). So basically I would have to put us under another contract and if we were to come across another place to live, we wouldn't be able to move because of said contract (and we can't pay two rentals).

The young lady that assisted me was very nice but I was kind of frustrated that things were just not looking up. I asked her then about a mobile business and she explained it would be in another office and I wouldn't need the list of things she gave me. PERFECT. I was so happy that there was another option I could try. So, I headed over to that other office.

I get there to find I couldn't go in because I had shorts on. No buttcheeks hanging out here, but apparently shorts aren't allowed. (Never mind that we're in the middle of a drought). No shorts = no getting in. Dresses are allowed (and I was prepared) so I threw on a dress over my clothes and over it a light sweater (dress has spaghetti straps). I signed in, went to the office, and waited for the gentleman to see me.

Apparently he had gone out to lunch using a different door. This is what I heard the receptionist tell another woman who was waiting for him. She asked if it was okay if his secretary saw him and the woman said yes. Then the woman told her, that he was coming back to see her. She knew his daughter and his daughter called him on his personal phone and told him to go back to see her.
He gets there (maybe upset he had to return?) and sees the woman. My partner said it was getting close to lunchtime (even though it wasn't even 11:45 yet) so he was probably on his way to lunch. I have no idea. All I know is the receptionist asked me if I was okay with seeing his secretary and I said yes. I started telling the secretary my plan and she seemed confused and went in to his office to see if he could see me.

I entered his office, smiled at his collection of motorcycle replicas (biker Teddy Bear included), and took a seat. I started explaining my plan and when I explained "phase 2", which was a mobile business, he told me he couldn't give me a permit for that. (They are no longer giving permits for mobile businesses unless it's food-related).

I inquired about the tables set up down my street and he told me they were going to be removed because only one of them had permission to do that and that person received it when they were giving those out. My option, according to him, was asking places of business if I could set up on their property outside (like in a parking space). I saw that ray of sunshine when he said that.

I was excited that there WAS a way I could open my handmade business. I repeated everything he said to make sure, you know? He nodded in agreement. I was grinning like a crazy person I was so happy. I couldn't believe it. I KNEW I needed something from his office of course, but I was just so happy it was easier than going through a whole permit process.

So I'm all smiles and I ask what requirements he needed from me and he answered 'get the vehicle first, then I'll tell you the requirements.'

I can't even put into words what I felt and what went through my head at that moment. I was in shock, I guess. I said okay, I thanked him, I shut my mouth, and I walked out of his office. As seconds went by I got angrier and angrier and not-nice words kept running through my head. I couldn't believe he said that.

I get it. I would need the vehicle so they can probably check the license plate or whatever...but what if I were to get it and then I couldn't get the requirements anyway? What did it cost him to hand me a piece of paper like they have done in the other offices? Was he really THAT hungry? THAT annoyed? THAT lazy?

It's so frustrating that they make things so difficult. I hate saying this but something I have noticed is that Puerto Rico isn't really "for" middle income people. They take care of the "big guy" and the "little guy". If you're the "middle guy", you're screwed. I want to go over this guy's head, though. I hate that he was the director of the office and the highest I can go in there, but he needs to have a boss and I feel like going directly to him or her. And when that person asks me why I didn't go to him, I can honestly say that I did and the unhelpful prick simply didn't want to give me the information I requested.


0 comments on "The Continuing Dilemma of the Handmade Business"