Before anything else, I wanted to share some images from our trip to 'Children's Park' last week and how our day went.  As I wasn't hoping, it rained.  We took the high chair anyways because it wasn't raining when we left but it wasn't exactly clear either.  By the time we got there it was already cloudy so we just took the king and the bags to look for a spot to set up the high chair.  I never really took a good look at the park before.  It does have its nice spots.


It has gazebos people rent out for birthdays.  Some of them have a mini playground near them.  They also have an area with swings, some that are handicap accessible. When we went they had some inflatables folded.  I'm not quite sure what they are but I'm guessing a bouncy house and maybe a slide?  Of course, my favorite, the pond complete with fountain, koi and turtles.  I love it.  I'm such a sucker for just about anything with animals.

Once we started checking out a spot with a nice background near the fountain, the raindrops started.  We ran to the vending area where they a roof.  We waited for the rain to stop but LM started getting a bit fussy so we decided to just set up on the counter.  Luckily, I took some supplies so I was able to tape the blanket in place (it was kind of windy) and tape the "I AM 1" sign over it.  We set up the video camera on the tripod, tried my camera which still had "Error 99" so we used my phone as a backup, and sang Happy Birthday.

He didn't get into the smash cake as much as I thought he would.  I'm not sure if it was because he was fussy or because he's not really that much into sweets (which I hope changes a little bit in the future).  I had a tiny issue with his dad because he insisted on wearing a white shirt he planned to use for work knowing it was a smash cake session, but I guess those things go with this whole two-parent thing.

After we sang and let him play with his food the rain let up so we walked around a little more to take a couple more photos and record a birthday greeting that he can watch when he's older.  I wasn't thrilled about the whole thing because of the rain and the shirt thing, but as we were leaving I was nursing my king and he just fell asleep.  Completely knocked out.  He didn't even budge when I put him in the car seat so that made me feel better.  I've always thought that when you have to carry a sleeping child out of somewhere it's because they had a good time.  And he's the one that counts.

Here are some cropped shots of the crown and banner: 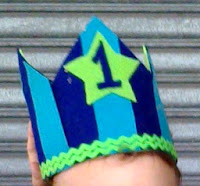 For the smash cake (you can see what's left of it in the bottom shot), I used an edited version of the smash cake recipe from Our Haven Hill and a banana glaze instead of frosting.
﻿

0 comments on "My King's First Birthday"