So NaNoWriMo is coming up.  As you may have read before this is not the first time I'm going to attempt to tackle it.  Still the same plan so there's not much of me trying to come up with an idea.  I want to incorporate a town I used to live in, which actually was always my original idea since I don't know when.  I was having problems before with the names for my characters.  I just couldn't come up with ANY name.  That's too easy and that's not...me.  hehehe

That's when I decided to really think about what words I would use to describe my characters.  After that, I went on some baby name sites and started looking for names that meant those descriptions.  Then, I did a search on the Social Security website for popular names in the years my characters were born.  Some I was able to work out.  There were others that were named out of personal feelings.  The same way I borrowed elements from the real town I lived in for the fictional town my main characters lives in, I borrowed characteristics from people I know...or rather knew.

I also have some scenes that I already know how they're going to play out.  I also have the main issue that needs to be resolved, but I guess not the technical stuff - the details.  And thinking about it...that IS a problem.  Something I may want to figure out before November gets here.  =o/

I want to share this calendar I quickly made up for NaNoWriMo.  I didn't put in as much time as I did for the Camp NaNoWriMo calendar (which I hope to use next year since it wasn't used this one LOL), but it does its job.  If anyone needs a larger version, just let me know! 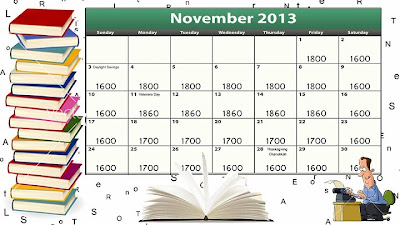