Your Dad vs My Dad

I always thought that when two people from different backgrounds got together, their backgrounds didn't matter. That it wouldn't really affect the relationship. In a way, I guess I feel that way...as long as they don't plan on having a family. If they do, then it's just a risk.

A while ago I learned about my partner's home life when he was younger. He never really talked about it and I felt that my asking would get into prying territory, so I just didn't. His mom was a little more vocal about it and it was through her that I learned a bit about their family life.
My family life was very different. It wasn't exactly a wonderful musical seen through rose-colored glasses but, compared to his, it was an Oscar winner. The thing is I always said both of my parents taught me the kind of parent I wanted to be. I would not do a lot of the things my mom did, but I WOULD do a lot of the things my dad did. To that I would add my own special twist (as well as things learned along the way that neither one may or may not have done). To this day, two and a half years after becoming a mom, I have done just that. I may not have done things exactly as I thought, but I am a pretty awesome mom. Of course, I expect things will get harder as years pass by, but I feel my dad would be proud of me. 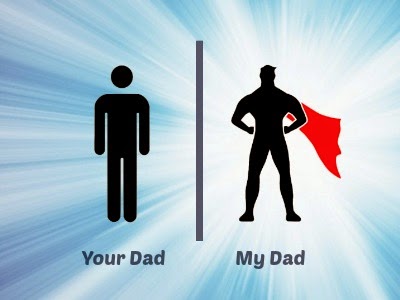 I'm sure my partner feels the same. I'm sure he feels that, because he is not like his dad, he IS being a better parent. But that's where the background differences come in. My partner is NOT a deadbeat dad that doesn't pay child support. NOT AT ALL. But, it's just that I feel that compared to MY dad...he is doing the bare minimum. I know this isn't fair. I try to push these thoughts out of my mind, but sometimes I feel bad that my king doesn't have the dad I had. I know I can fill both roles. I just feel I shouldn't have to. Before you can say "talk to him" let me tell you...I have. The thing is...like I said...to him, because he is not like his dad, he is a great dad.
It's why I think that if you're looking for something long-term, get to know a bit about the person's background. Compare it to yours. How willing are they to do more than the "bare minimum" as a parent? If it's something yuo'd gamble on, then go ahead. If it isn't, then you have things to think (and possibly talk) about.

0 comments on "Your Dad vs My Dad"