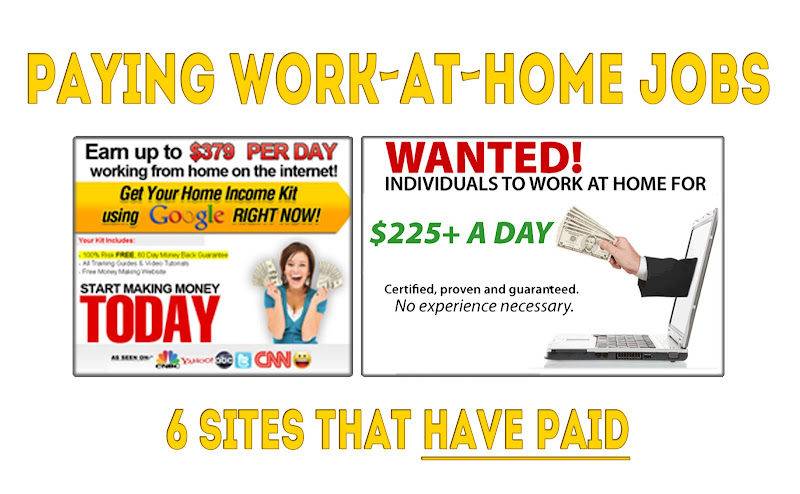 As I mentioned in a previous post, I hate those ads which say you can make hundreds of dollars in one day. You either have to pay some sort of fee "for more info" and/or it requires you to "build your team" (read: find other suckers). I feel the same about MLM that require team building and sales. With those, it comes to a point that everyone and their mother seems to be selling the same things. It was like Avon and Mary Kay back in the day. Then there are sites that "pay" for writing posts. These say they will pay, for a example, a penny per view but when you go into the site it just seems so spammy in itself that who would really want to visit it? So, it's more work than writing to bring traffic to that site. And I won't even go into the deceptiveness called Wasanga.

What I dislike hate about these things is that they are usually targeted towards stay-at-home-parents. I know first hand that feeling of wanting to bring in some sort of income, even if it's small. I can understand why some of these sites seem interesting and like it would be worth your time. I originally signed up for a site called Bubblews which apparently stopped paying after a while. I also signed up for sites DailyTwoCents and Writedge. I must admit the admin there are on the other side of the spectrum from those at Bubblews. They are constantly letting their writers know what is going on with the company and always give tips on writing and how to get traffic to your post on their site. the reason I haven't been as active on these sites is that, as a reader, I visit the site and when I'm reading the article there is a lot coming at you and it's kind of "hectic" to get to the comments area. As a writer, I feel there are way too many opportunities for a reader to navigate away from the page. And don't get me wrong, i know these sites live off of ads (I have my share of buttons on the side) but I think they take up a lot of space. Their payout minimum is low compared to other sites, so although I haven't reached payout, if you're interested in writing for pennies (it's what I call it) it's something you may want to check out. They also have other sites related to the same company with different areas of interest. But for this post, I want to share some WAH jobs I have done AND have gotten paid. These are the ones I trust and fully recommend.

Postloop - Postloop does a pretty good job on explaining how they work. Once you pass their qualification test, as a Postloop poster you get for each post/comment written. The points given for each post/comment depends on how many points are available, when they are posted (they prefer spread out throughout the day), and if there are any bonus points given (it depends on what rating the writer has). Once a writer has reached 100 points, which converts to $5, they can request payout to PayPal. I know of some writers that hold out on withdrawing until they have more. Personally, I cash out as soon as I have reached minimum. You know the phrase "Here Today, Gone Tomorrow"? Yeah. I rather not risk it.

I have my gripes about this blog/forum posting. Some forum owners (because so far it's with them that I've encountered this), have a set of rules/guidelines that is pretty ridiculous for the amount of money they are paying. This is not just writing a comment on a forum. You have to take time to read the threads to see which one you can contribute to before doing any writing. If you are going to start a thread there is some time going into that as well because to create a conversation, you can't just write any thought that comes into your mind. Some forum owners want you do 40% of your posts as thread starters, more than 50 words, in certain categories only, can't be about something someone else already posted...I mean, this is going to take over three minutes. Yes, I understand they want good English grammar and I get...but everything else? Sometimes they go too far and it's why their community's participation dwindles at times. Last time I calculated the time spent into it and how much I made during that time I ended up at about $1.25/hour. Not worth it so I stopped putting so much time into it.

Another drawback to Postloop is that, although their admin is GREAT at communicating and helping out, sometimes a lot of the rules are more pro-owner than pro-writer. I get it. That's how they get paid. But they allow for anonymous ratings which kind of suck when you get a low rating without knowing where it came from or how to improve risking you making the same mistake that you may have made.

Because of my experience with Postloop so far, I only dedicate a set amount of time to "postlooping" each day. The main thing is: do they pay? YES. I have reached payout several times (once I did hold out until I had over $20) and have never had a problem. Once a request is in, they review it and the most it has taken (again in my particular case) is 24 hours. Personally, I've only found a handful of forums/blogs I like to participate in but there are many to choose from and you may find more than I have. But yes, they're legit.

The Forum Wheel - TFW is very much like Postloop. It's basically the same thing. They had issues in the beginning because of forum owners and TFW mods being TOO strict about what was allowed and how things had to be written, but personally I have never found an owner which gave me those problems. They are pretty new so their number of options to choose from are few. BUT, their minimum payout is...well, none. I just wait until I've had $2 accumulated before cashing out. They also have always paid and do so within a very reasonable amount of time. No complains here about The Forum Wheel.

Bing Rewards - I know a lot of people may "google" things, but I prefer to "bing" them. Although only allowed in certain areas, once you register with Bing Rewards you get points for doing your searches on Bing. Depending on your status (Member, Silver, or Gold) you can earn a certain number of points per day. Once you have points you can redeem them for any of their prizes available. Once you reach Gold status, you can get certain rewards for a lesser amount of points. Weekly they'll have a trivia where you can earn three points and once in a while they have double points day. Honestly? I used to use Yahoo search all the time until I discovered Bing Rewards. Now, it's all I use. I wish I could say what prizes they have, but mostly I've redeemed for Toys R Us and Amazon gift cards. I've redeemed many, many, MANY times so for me, Bing rewards is a plus.

Web Testing - Although this is something I do independently, I am also signed up with User Testing and TryMyUI. I haven't had luck finding a test that fit my demographics with TryMyUI, but I have done a lot of work with User Testing. Basically, you simply visit a website and speak your thoughts. With User Testing, you can get paid $3, $10, or $15 depending on the test and you get paid a within a week to the minute from taking the test. It IS on a first come first serve basis so you need to have that browser tab open. You have to also consider if what you're spending on energy having your computer on waiting for a test, is worth risking not getting one. If your computer is going to be on anyway, well then I don't see why not leave a tab open. When I started with User testing, there were A LOT of tests coming in. To the point that my king was already familiar with the "ding" of an incoming test and knew the drill of sitting down quietly while I tested. Unfortunately, test availability has decreased considerably. I think this may be due to having many users and not so many tests.

The four that I have mentioned previously are work-at-home jobs that I, as a stay-at-home-mom, have used to make money online. I wake up early to do them and so as my time spent on them does not take away from time with my king. Admittedly, it depends with the web testing. If it's an independent test, I can do it during certain times but when a test came through via User testing, I had to take it at that moment. My time with my king is far more valuable than any of these companies could pay.

These two sites, Swagbucks and e-Rewards, are sites my partner uses. Although my partner works out of the home, and although his time spent on these two are a source of contention between us, he uses these two sites and has redeemed several times. Basically, from what I gather, it is a lot of clicking and taking surveys. I don't have the numbers so I can't say if the time he is spending on these sites is worth what he is getting paid, but he HAS been paid. He has redeemed points for gift cards from Amazon, Game Stop, and Walmart (which is usually when we need something from the home).

If you're looking for a work-at-home job and want to know how to make money online, I recommend you check these out for yourself. I have checked out quite a number of different ones I found online, and these have been the ones that I can truly recommend as paying online jobs. (◕ᴗ◕✿)


NOTE: Some of these links are referrals links that if you sign-up with them, give us points for the sign-up. This does not, does NOT mean that I included them to include them. These work-at-home opportunities HAVE BEEN tried and verified by me.