After I found out I was pregnant, I made changes to the way I ate. I cut down on fast foods (YOU tell a pregnant woman NO when she’s craving some fried chicken), started eating more veggies (in quantity and types), and started using whole wheat flour instead of my regular white one. We also (almost completely) cut out processed foods.

After giving birth, I kept my eating habits. Not to say I eat completely healthy. I may not have a sweet tooth, but I have a salty one. (Pretzels and popcorn are my downfall and I don't think there will ever come a day when I give them.) I always liked cooking from scratch, but I had the few recipes I would always do over and over for myself. Once baby was here, I started looking into how I could make from scratch the boxed foods my partner bought for himself because I wanted my king to have more options than I usually give myself. 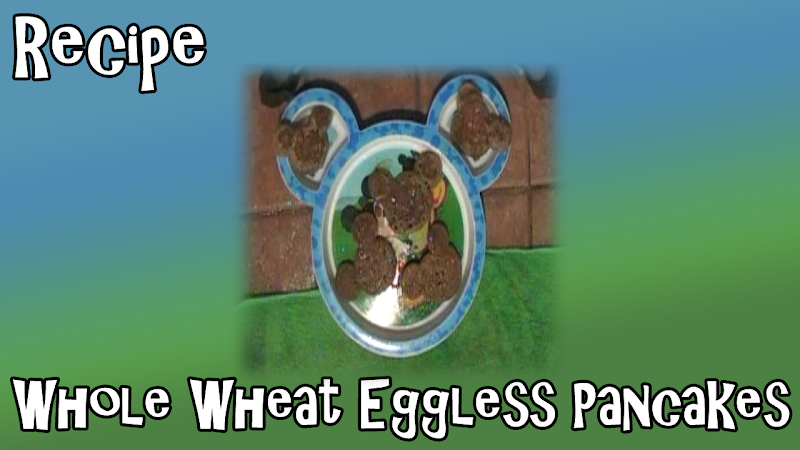 One of the easiest (and most fun) recipes to make is my whole wheat eggless pancakes. This came from a day I REALLY wanted pancakes but didn't have any eggs. It took some trial and error to get them just the way my king and I liked, but now it comes naturally to both of us. And I just LOVE making it with him (although he gets a little desperate waiting for the end result once the mix is ready. LOL)

The trick to these whole wheat eggless pancakes is too not over-whisk the batter. You WANT some lumps in it. Another trick is to let the batter sit for a few minutes before cooking. What I usually do is, while it's sitting, I wash the dishes/utensils we used, heating up the frying pan, and melt a little butter in it. You don't want TOO much butter. Just enough so they won't stick. You can use non-stick spray if it's what you normally use. If you use butter and you see some melted butter just swirling around, then it's too much. Pour it out because you don't want to fry your pancakes. I know it's healthier to use olive oil than butter and I do sometimes, but sometimes...yes...I'm a butter girl. I'm working on it, though! ;o)

What I love about this recipe is that you can adjust it as needed and not mess up. You can adjust the amounts because maybe you make larger pancakes or maybe you need more pancakes. My king LOVES cinnamon, so sometimes I add a little more. I do not like it, so I omit it completely when it's only going to be for me. Also, these tastes AWESOME with almond milk. Maybe you'd like to try with cashew milk instead. It's just a matter of substituting as long as the consistency of what you're substituting with is the same. Hope you enjoy not only the pancakes, but making it with your kids!(◕ᴗ◕✿)

You can watch the vlog here: